Home > Up and Over

IT HAS been a dismal summer, weather-wise, but for John Cayzer the seemingly non-stop rain during June and July proved a blessing in disguise.

Cayzer and his family are farmers and would, under normal circumstances, be well on with the harvest by mid-August. After being allocated to the Bradford semi-final he decided he could not afford the time away from the farm and opted out of the World Championship.

But the rain in the early part of the summer, plus another wet week early in August, had delayed the harvest, and more-or-less on the spur of the moment, he drove up to Bradford, took his place on the grid and qualified for his first world final.

The Cayzer family, as well as being farmers, are no strangers to stock car racing. Cayzer's father and elder brother both raced under Board of Control licence in 1964, and John also tried his hand around June, 1967. Thereafter, their activities were confined to oval circuits outside the BriSCA scene until Cayzer took the plunge at the start of 1979 and took out a Formula One licence.

His first F.1 car, purchased from Rex Hart, lasted about half last season and was replaced by a self-built vehicle. Another new car was built for the start of 1980 powered by a 455 Buick engine. 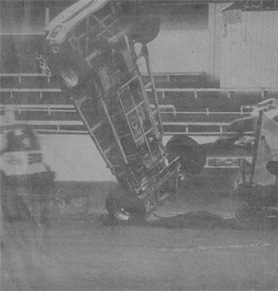 With his previous experience and grading taken into account Cayzer started last year as B Grade and quickly moved to A Grade. Following his first Grand Final victory at Northampton earlier this season he now sports Red Roof, one of just two southern-based drivers (the other being Glyn Pursey) to break the northern dominance.

A preference for tarmac and an outright dislike of wet shale may put Cayzer at a disadvantage, but with his sights firmly set on continuing his BriSCA racing career the final can only be of benefit to the Saffron Walden-based racer.