'STU'S VIEW' OF THE 26th MAY 1975
EUROPEAN SUPERSTOX CHAMPIONSHIP 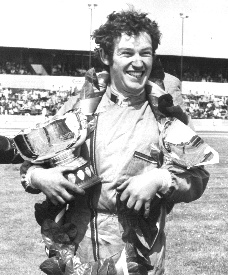 Contrary to rumours of leaving the country, working for other promoters, entering a monastery etc, I was still about, though not officiating at meetings, that is until Monday 26th May when I was called upon to commentate at the European Superstox Championship, Foxhall Heath. Unlike Easter Monday, the weather was perfect and the track conditions superb. (Well done the after Speedway sweeper-uppers.) A one o'clock start with no grand parade brought Race 1 for Superstox, onto the bill, and was a real good 'un despite the fact there were no red tops competing before their big race. Down graded star man Bob Perry secured an easy win following a regrettable slip-up by Chris Studd when leading on lap 17.

The Hot Rod Team Racing, part one, followed with Barry Lee and his lads scoring a win in two out of three eight lap heats and in fact winning the entire match.

Then came the parade of qualifying drivers, from Europe, Scotland and of course England, with Tony May handing back his much-won trophy and telling everyone how much better BMC "lumps" are than Ford!

The draw for grid positions took on a slightly different form with each driver picking a ticket from the cup with the grid position number on it. Believe you me, if my microphone lead had been long enough you could have heard some choice phrases from the likes of Doug McMahon being drawn 35th out of 35. Typical McMahon luck!

The race began with top East Anglian Johnnie Cayzer in Pole position, from where he completed the forty laps to take the honours with no challenge. Despite his good fortune he could well have won had he been six rows back judging by the turn of speed produced when required.

The race was not without incident, especially Scotsman Dave Morris colliding with a large post right in front of the box, taking third place man Antony Van den Oetelaar with him. Tony was certainly putting up a creditable performance, especially as it was only his eighth drive in Superstox His brother Adri was equally unsuccessful, having done a double flip on the back straight early on, and captured in flight by a BBC cameraman!

So the final result was Cayzer 1st, Neil Bee in his ex Doug McMahon car (now Ford powered) 2nd, and Doug McMahon himself who had weaved himself in the usual fashion right up to 3rd.

Presentations were conducted by Dutch and German promoters Barry Van den Oetelaar and Hans Housen, and our own John Clark.

The remaining races for Superstox were all of a high standard, the heats being won by Ron Harrison and Brian Long. The Final was a fantastic race, which started with 47, yes 47! cars, and developed into a chase behind flying yellow top Ron Harrison which concluded by Ron losing control on the final bend of the 30th lap, and letting John Cayzer establish his European success with a win in the final.