CAYZER FAMILY AGAIN IN THE NEWS

At the end of last season Ron Cayzer, father of the now-famous Saffron Walden family of stock car drivers, hit the headlines with his successes which included the Spedeworth Golden Award and Man on the Terrace Journal Award.

On the first regarding for Superstox, which took effect on March 27th, Ron’s youngest son John has secured the Silver Top by the narrow margin of one point from World Champion Dave Pierce. Many congratulations to John and good wishes for his continued success.

The early reshuffle at the top of the points chart suggest that the competition for the coveted top spot is going to be very keen indeed this season. Racing in the Superstox formula had certainly got off to a very exciting start and has produced some hair-rasing incidents both in the South and East Anglia.

“Now the Cayzer family seem to have the happy knack of race reading with the help of the front bumper work, especially the senior member. It is something that the public like to see.”

ON THE HEATH
By BRIAN WILCOX

News on the latest meetings and the personalities at the Foxhall heath Raceway.
Hot off the first points chart is the news that John Cayzer (381) is the first silver top of the year. This is a tremendous achievement to add to Dad’s (379 Ron Cayzer) recent heat wins at Wimbledon. The Cayzer family certainly look set for big things this season. I expect either Trevor Frost or Derek Fiske to also get their share of the silver top status again this year. Let’s hope that our East Anglian drivers can keep the status in the area for the whole of the 1969 season. 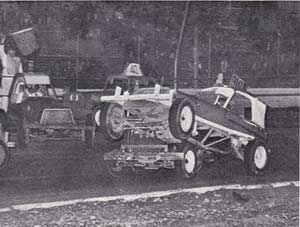 …But the most explosive start to the season was made by the Cayzers, John, Ron, Alan and Peter. With John sporting the silver top he often found that he was forced into a duel with his Dad, Ron, the man with the red top. And Alan, blue, and Peter, yellow, are still there to add salt and pepper to the ingredients of a typical stockie contest. What I would like to know is who is going to start the first fan club for a whole family- the Cayzers deserve one.

Ron Cayzer and his younger son John complete with Silver Top, had already made their marks this season. Elder son Alan must have felt that he was a little in the shade, but Easter put all that right with his final win at Walthamstow and his heat win
at Wimbledon, plus his success in the first qualifying heat for the South London Championship. This latter event is most welcome, and Bainshaw of Wimbledon are to be congratulated in sponsoring an event which at Wimbledon at least will replace the old Match Race Championship.

Alan Cayzer (380) : Third in the British Championship Alan, like so many other East Anglian red tops, is at the top of his form at the moment. With his strong, powerful looking car this driver from the famous family always has a smile after a race- He should well tonight and if he gets a good draw he will be one hard to catch.

John Cayzer (381) : John surprised everyone by taking the first silver top of the season and this very young looking good driver often gets confused with his brother. The cars look the same end, like Alan, he takes his chances and won't stand for any nonsense on the bends. Watch him tonight. I won't be surprised if he gets a place.

Ron Cayzer is the current holder of the trophy. He is a very hard man to beat on his night. Don't be fooled with the idea that he will be racing on strange territory, because this stadium is definitely a neutral raceway, the more varied the drivers geographically, the better. Will Ron be able to do a Ginger Payne? Soon we will know. Whoever wins tonight will have a great trophy to hold for one year, and he will have won it before one of the biggest gates of the year.