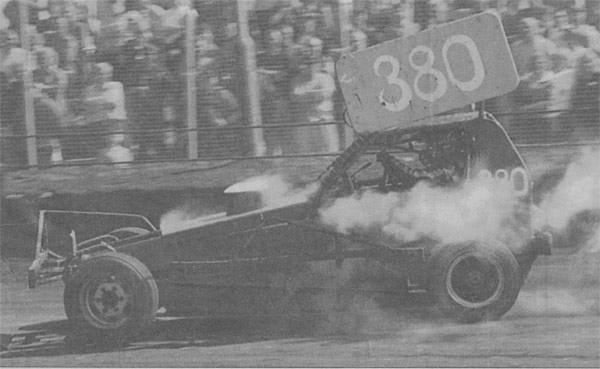 Saffron Walden-based Cayzer, a 26-year-old Tesco Stores warehouse section manager, delighted the crowd at Skegness Stadium when he defied all the odds to win his first major championship title in the formula.

Throughout the qualifying heats, B grade drive Cayzer posed a significant threat to the star men and visiting Dutch drivers with some outstanding drives which belied his age and his limited racing budget.

One or two heart-stopping moments caused spectators to catch their breath, not least of which was the steam escaping from the air filter and the sides of the bonnet as the powerful Chevrolet 540 cu in big block V8 engine started to overheat in the latter stages of the championship race.

Undaunted, the canny youngster turned a race stoppage to his advantage allowing the following pack to close down a substantial lead he had built.

To prevent the shale track from dusting up too much after the delay, a water bowser was brought out to water the track on the first of two slow rolling laps of the restart.

Driving the 380 car as close as he dare, the spray from the bowser served to cool the hot Chevy and gave Cayzer an edge over Wainman jun who admitted that his own engine had been running hot over the weekend. 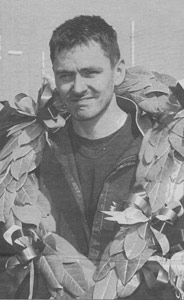 "Winning a Championship Final is more special for me because I designed and built the car myself from the chassis to the fuel tank. " said Cayzer.

"I buy bits for the engine from Peter Knight Racing Engines, but I also build that myself.

"I have learned everything I know about car construction and engine building from my father Alan who raced stock cars and Superstox for many years".

The Cayzer family are entirely self-financing and self-sufficient his win was even more impressive when considering he has no back for up team.

"I do everything myself, with some help from my dad — it would be good to have a mechanic to help, but in this area Fl stock car racing is not that well known".

Cayzer credits the car's improved performance over the UK Speedweekend with some advice he received from former world champion Len Wolfenden who has been giving him some very valuable tips on car set-up.

"He suggested I made some changes to the axles which I did the week prior to the event — it paid off and I'm hoping now that I'll be more consistent and get some more world championship qualifying points to get into the World Championship semi-finals and final which is at Coventry International Motor Speedway in September."