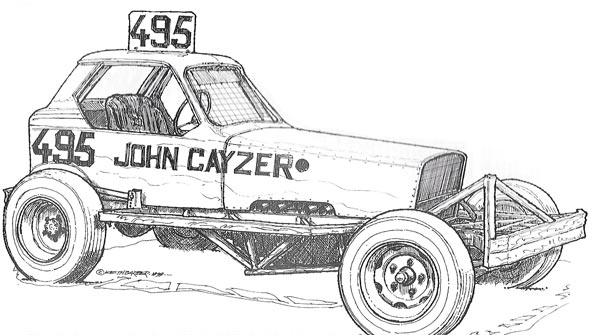 John Cayzer first shows in STOCK CAR in the April issue of 1979, the photo caption referring to the fact that the car carrying the number 495 first showed at the New Years eve meeting at Northampton, December 31 1978, but the Cayzer family did in fact go a lot further back than that, as borne out by a profile on the family in the April 1980 issue of STOCKCAR..

That the occasion of a two page Cayzer special, primarily about John, hut also slotting in the family connection, which amounted, in racing terms, to
father Ron and brother Alan. John it seems saw his first stock car meeting at Rayleigh in 1958, age seven! Along with the rest of the family, he continued to watch racing wherever it could be found, which entailed travelling to many parts of the country, but the emphasis changed when brother Alan reached the age of 16. Alan’s enthusiasm to race saw a car quickly purchased and in for a penny, father Ron took the plunge as well.

The year was 1964... Alan raced 266 and father Ron 267. As for John, he was still in school, but when the critical age of 16 was reached, John too took to the track at the wheel of the car which Ron had started with, and which had its origins with Tony Last from Diss.... the same home town as this months Supercar small world!

In that brief introduction to big league stock car racing, John emerged every bit as natural a racer as his father and brother, winning races at Kings Lynn and Coventry, but the career was abruptly terminated. Ron was party to an incident that required Stock Car Board of Control judgement… the name JumboTustin and Brafield are ringing in the ears but no doubt John will put us right. Whatever the cause, Ron considered himself slighted by the Board, and in the space of a few weeks Cayzers were history. Issued with the numbers 379, 380 and 381, they were now Superstox racers with Spedeworth, and over the next twelve years proceeded to win between the three of them over two hundred finals.

But history has a habit of repeating itself. By the summer of 1978. John wasn't exactly impressed with the way the Superstox scene was developing, and after watching a few BriSCA meetings decided to reinvent his big league career. He bought the Rex Hart car, rebuilt the Buick power unit, constructed a new Cortina based body, and was ready to go
racing by Christmas. The rest is more recent history. With the exception of a year missed
through an injury sustained at Long Eaton John has remained active these past twenty years. And while John's own son has never shown the inclination to get behind the wheel, Steve, who is Alans son, has proved to be equally adept with the bumper.

You are bound to speculate when John might decide that carpet slippers and the armchair are the better option on a Saturday night, but 2001 sounds about right. That will he 34 years of racing age 50… then again, wife Diane once said he was impossible to live with when he didn't have a stock car to play with, so maybe he will do a Goodman and aim for another decade!