Home > Father and son show their skill in cars 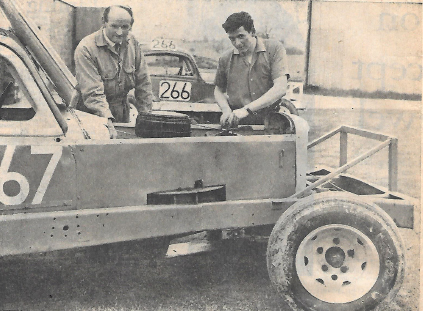 Father and son show their skill in cars

Mr. Ron Cayzer and his 19-year-old son Alan, of Bourne Farm, Ashdon, near Saffron Walden, are now in their third season of racing.

In their first season a Walthamstow Stadium programme writer said of them: "For first year drivers they get my vote as the most promising newcomers of the 1964 season, and for that matter, the best prospects, as newcomers, for the past three years."

That was written after Mr. Ron Cayzer won a world championship qualifying round, and since then both father and son have won a number of trophies.

There are four grades in which drivers are placed-red tops-the "stars"-blue tops, yellow stops and white tops. Ron and Alan are both now blue tops, and Alan is likely to become a red top in the near future-one of only 15 in the country.

"We had watched stock car racing for years," said Mr. Cayzer. "Then my son bought an old car, and to keep him company I bought one too. We found it fun- and it was quite safe. The only danger is fire. We race for the thrills and the fun."

They have three stock cars, but use two only for racing. Mr. Cayzer's other son, 15-year-old John, is taking up stock car racing as soon as he leaves school this summer.

Mrs. Cayzer has no objections to her family racing, and neither Mr. Cayzer nor his son have received any injuries, apart from a few jolted necks, which would back up any objections.

"I feel a lot safer racing than I do driving a private car on the road," observes Mr. Cayzer.