A FAMILY AFFAIR
by BRIAN WILCOX
and "Man on the Terrace"

Go to any Yarmouth Superstox meeting and during the evening you'll see one to the three Cayzer's on the control car, and it's not unknown for them to get first second and third in a race. They all started watching racing at the Rayleigh Weir Stadium in the late fifties. To most people, they are and always have been Superstox drivers, with Ron and John having a few tries in the Saloon Stocks and Alan racing Auto-Speedway for the Foxhall Foxes based at Ipswich. It was, however, in Formula one racing that all three started, although John only had a few months of the bigger cars before all three joined Spedeworth and started racing the Superstox.

A quick run down on their racing careers by Man on the Terrace proves just how good they have all been:

Having asked John and Alan if I could do an interview during a meeting at Wimbledon they both dived for their cars and suddenly were very busy. So I told them I was going to do it and showed them the No.4 Short Circuit with the trailer for this article. Three weeks later I finally caught up with them on the phone.

John was first 'Hello and Cheerio, will that do?' It didn't. he said that having raced for so short a time, In his F.1., he didn't have a favourite track or anything that he counted as his biggest success although his father was quick to point out that John has won a few races in the big car. His favourite track in the Super is Yarmouth and when asked what he considered his biggest success he just said 'There's no difference I'm always trying'. Would he go back to F.1.?
J.C. - Well, they're too expensive.
C.J. - How about racing a Hot Rods?
J.C. - I'd like to have a go but they look so fast and I don't like having to buy racing tyres. (Pause) They're only a bit faster than us though, it's only about half a second a lap isn't it?
C.J. - Will you race a Saloon Stock again?
J.C. They're a disaster for me, no thanks!

Alan was next on the list but he was suffering from a bad cold, so his wife took down the questions and then I 'phoned back the next day for the answers.
C.J. - What are the biggest changes you've seen since you started racing?
A.C. - Well the style of cars, there's a lot more money in them. You only have to look at the pictures of cars a few years ago.
C.J. - Which tracks do you like best?
A.C. - For F.1. Coventry was my best rack and I've never missed a meeting at Wisbech since it opened.
C.J. - Which wins have given you greatest satisfaction?
A.C. - I don't know really, 2nd in the 1970 British and 3rd on the European last year probably.

Ron was next, but was on holiday, so I spoke to his wife and asked her what it was like having three stock car drivers in the family. 'Its been so long, I've got used to it, anyway, it's great fun and it's always been a family thing. I've enjoyed it'. A reply a large number of drivers would love to hear their wives give I have no doubt. Once Ron came home, I spoke to him.
C.J. - What do you remember most about your big roll at Wimbledon?
R.C. - I remember it alright. I just wondered when the car would stop rolling, it went on for ever.
C.J. - Which tracks do you like the most?
R.C. - The 'Stow (Walthamstow) was my best F.1. track. I won a World Championship Qualifier there. I suppose Yarmouth in the Superstox.
C.J. - Which wins have you enjoyed most?
R.C. - Well, I won the Golden Award one year (Superstox 1968) and the Tip Top Trophy at 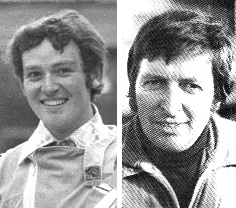 The one impression I got speaking to all the Cayzer's family was that they raced because they enjoyed it and it was family entertainment. I know that they would like to travel more both to Scotland and the Continent but when you run the largest farm in East Anglia, that isn't possible. As Alan pointed out, stox are fun, farming is their living.

Sorry, we can't get a picture of 'Pop' anywhere!